Music can transport us, via motionless transportation, to places heretofore unknown.
And thus began this mix project & elements edition – a meandering blended mixture of Ether & Jazz.

Cover image painstakingly commissioned by “the artiste” via Paper by Fifty-Three.
76:46

by Nadja Lind, aka, Aashya

Every single ‘Turning In Ambient Drone’ wave is designed to gently guide you into states of deep relaxation, emotional release and inner peace, achieved through underlying binaural frequencies – frequencies designed to physically stimulate both hemispheres of the human brain which is being used to help with the symptoms of post traumatic stress disorder (PTSD).
This helps your body to naturally release its own destressing hormones, allowing you to breathe deeper, help your physical and spiritual body to rebalance and to recover quickly from the rigours of everyday life.

How to use the binaural tracks most efficiently:
1. use (noise-cancelling) headphones (the binaural frequencies are produced by your brain through aural stimulation of hemispheres through slightly different frequencies on your left and right ear

2. check towards the middle of the track if the volume is comfortable since the tracks are being faded int. Note that after some minutes the perception of sound might get more intense since usually our brains adapt to the environmental noise pollution.

3. ideal is if you can lay down and cover yourself with a blanket. Note that after lying still for some minutes your heart-rate and body temperature lowers.

4. it is vital for the recovery & energy charge process to be completed. So please make sure you will not get interrupted during your listening cycle. – enable e.g. flight mode on your phone
– make sure nobody will knock on your door for 22min
– if applicable use noise cancelling headphones to protect yourself from outside noises

5. put on a blindfold or darken the room. The listening experience will be much more effective the less distractions through other senses/sensations.

6. the drones are designed to keep you right at the edge between a state of being awake and sleep. If you nevertheless fall asleep the drones get more intense towards the end to gently wake you up.

How does each binaural Turning In Binaural Drone soundscape help do this? They assist you by:
● deepening your breathing
● relaxing your body and mind
● stabilizing your immune system
● easing your brain and nervous system
● energizing your body after training, at work or during breaks
● increasing creativity
● deepening & enhancing your yoga/meditation practice
● releasing fatigue
● focusing your thoughts
● helping you tap into your inner joy
● getting you closer to your inner self
● enhancing your capacity to study and learn

More than any other person, Leonardo Pavkovic has made me write some crazy shit.

Pavkovic is the primal force behind the joyously eclectic MoonJune Records, which he established in 2001. “Established” may not be the right word: “I am truly an unusual and rules breaking call-it-record-company with a ‘label’ identity despite the fact that as a person and as a ‘label’ I go out of any categorization and labeling of what I do,” he confided before our interview. “I am a stubborn Don Quixotesque romantic warrior and one-man-band army wearing many hats.”

MoonJune’s mission statement:  The ongoing goal of MoonJune is to support music that 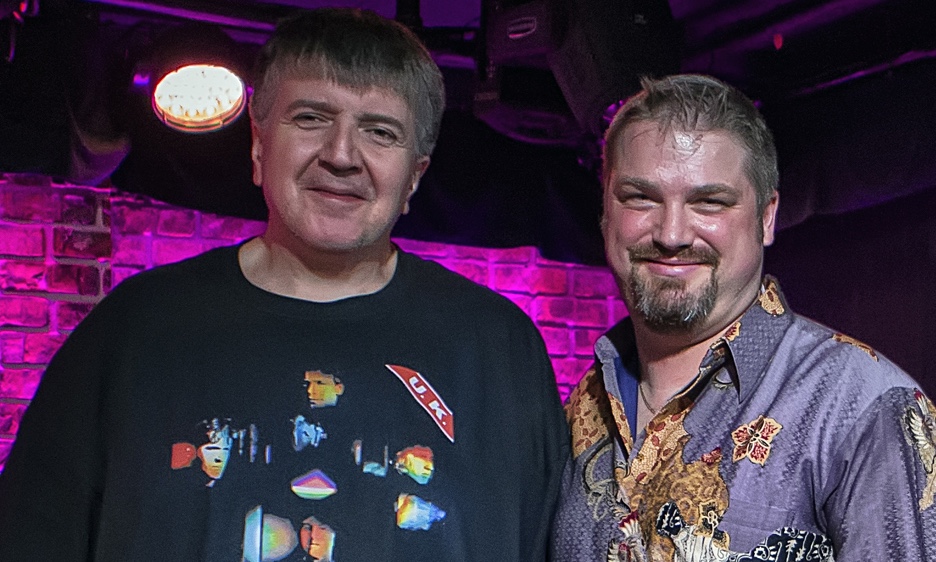 transcends stylistic pigeon-holing, but operates within an evolutionary progressive musical continuum that explores boundaries of jazz, rock, avant, ethno, the unknown and anything in between.

Pavkovic was born in Bosnia in the former Yugoslavia in 1962. He was raised in southern Italy and studied Portuguese and Brazilian literature at the University of Bari (Italy) and Afro-Portuguese History and Literature at the University of Luanda (Angola, Africa) en route to becoming fluent in six languages. Before MoonJune, he translated artistic and scientific literature from/to Italian, Portuguese and Serbo-Croatian, and published two volumes of original poetry. Pavkovic established MoonJune Management and Booking, now MoonJune Music, in 2000, copping its name from “Moon in June,” a Robert Wyatt tune on the third album by Soft Machine, one of his numerous prog-rock-jazz-fusion inspirations.

MoonJune Records is only part of Pavkovic’s impressive music business reach. As a booking agent, he has coordinated more than 2,000 concerts in more than 50 countries worldwide. Even though MoonJune Records consumes a great deal of his energy and time, he still does not consider it his “main business”; instead, it’s just one more chapter in his lifelong diary of musical surprises.

In late 2017, Pavkovic assembled the twenty-five track compilation It Must Be Jazz to celebrate the label’s fourth-place finish in DownBeat‘s annual “Best Jazz Label” poll (up from seventh place in 2016) and released it as a free digital download to thank the label’s fans. Its title track was jointly composed by guitarist Allan Holdsworth, keyboardist Alan Pasqua, bassist Jimmy Haslip and drummer Chad Wackerman for Blues for Tony, their 2010 ensemble tribute to powerhouse jazz-rock drummer Tony Williams who passed away in 1997. This high-voltage piece of electric jazz-rock fusion was born from sentiment and experience: Holdsworth replaced John McLaughlin for a year as the Tony Williams Lifetime guitarist, and both Holdsworth and Pasqua were members of The New Tony Williams Lifetime.

This Might Be Jazz opens just as majestically, with the title track to Indonesian pianist Dwiki Dharmawan’s landmark Pasar Klewer, regarded one of the top jazz albums of 2016. Dharmawan’s playing, especially when accompanied by just bass and drums, sounds absolutely ferocious as it splatters chords and rhythms all over the ivories, mixing up mainstream, free and avant-garde jazz piano. “Indonesia is the place of ‘ultimate diversity,'” the pianist explained upon Pasar Klewer‘s release. “Here, the urban cultures accelerate the ‘acculturation’ process, which generates changes in cultural patterns and creates new forms of musical expression. Pasar Klewer is the answer to my search for ‘the difference,’ and also a valuable answer to our modern crises and urban uprooting. The album’s distinctive sound originates from an ancient Gamelan tonal system called Salendro, known in the Karawitan traditional music of the Sundanese, Javanese and Balinese.”

Pavkovic’s uncompromising and knowledgeable devotion to music has earned in return the same affection from MoonJune’s musicians. “Leonardo’s perspective on music has served to encourage and inspire musicians throughout Indonesia to create the music on a higher level,” explains Ligro guitarist Agam Hamzah. “MoonJune Records has been great in its impact, helping to orchestrate so many positive changes for the benefit of the Indonesian music scene and its artists. Being associated with Leonardo and MoonJune Records as a musician and as a friend is an honor and a privilege.”

“Like its namesake orb, MoonJune steadily casts its light across a commercially ravaged musical landscape without ever capitulating to the market, a rare paragon of musical virtue in ever more culturally bankrupt times,” suggests guitarist Dennis Rea (Moraine, Iron Kim Style, Zhongyu).

“Because his vision and erudition know no physical or mental boundaries, MoonJune might seem an oddity founded by a starry-eyed idealist, a rather utopian proposition in our increasingly prefab musical world,” muses guitarist Michel Delville (The Wrong Object, Machine Mass, DouBt). “But, to me, MoonJune is not just a record label pushing out alternative music. It feels more like a family of like-minded musicians keen to explore new grounds while collaborating with each other and engaging in a dialogue between the past and the present.”

How enthusiastic is Pavkovic about music and MoonJune? After we finalized the following 12,000 word interview, he mused, “It’s a bit LONG, but I have so much to say and what I said is only 1.75% of what I would be able to say.” Leonardo Pavkovic exemplifies a profoundly personal yet widely public relationship with music. It’s hard to imagine how the future of this music could be in more caring, capable hands than his.

All About Jazz: Where’s the best place to begin the MoonJune story?

Leonardo Pavkovic: When I first started the label, I had no background in the music business whatsoever. After I moved from Italy to New York City in August 1990, I met the renowned Brazilian graphic artist and photographer Fernando Natalici, who created the legendary “Studio T” graphic design studio in the mid ’70s. Studio T was almost a cult phenomenon in downtown Manhattan. Fernando himself was a living encyclopedia of virtually everything that happened in the New York music scene during the 1970’s and ’80’s, and soon we became inseparable friends. (Later, I became his business partner). Studio T was known for its large clientele in the city’s music business community, so I was always in the company of great musicians, concert promoters, and record labels owners and executives, from majors and from independents.

In the early 2000s, I was briefly involved with the NYC-based label Jazz Magnet Records through a jazz publicist and music industry veteran, the legendary Jim Eigo. This experience was both inspiring and beneficial. Motivated by that experience, I decided to start my own record label and released my first album, a live recording of the legendary saxophonist Elton Dean, who I’d known since the mid ’80’s, while I was living in Italy. Two other live albums of young Italian progressive rock bands quickly followed: Finisterre’s Storybook and D.F.A.’s Work In Progress Live.

A non-piano specific (but mostly piano) mix;
blending ambient, electronica & a dash of ECM Jazz
(with, uhm, a treatment/wash or 2) . 81:42

A favourite producer of Lucidflow, Dub Taylor is the deeper, dubbier alias of Alexander “Tigerskin” Krüger – best known for his releases across the highly regarded Dirt Crew, Morris Audio, Dessous imprints to name a few. As Dub Taylor, he popped up on Lucidflow co-owner Nadja Lind’s epic ‘Brain Candy’ remixes album – taking After The Rain through a slowly swinging harmonic dub workout. However, his debut release on Lucidflow ‘Path Beyond Ego’ sees the Berlin based producer in vibrant and energetic form.

This is epitomised in lead track ‘Get Up Dub’. Rolling and hypnotic, the melodic elements sit low in the mix like a blanket of murky mist, perforated by the shout of “GET UP!” throughout the track. Direct and effective, it begs for the long undulating mix treatment from DJs in full mastery of their pitch control skills.

Equally rolling is ‘Lamma’, whose tumbling beats drive the track. Resonate dub chords straddle the dived between percussive and harmonic, twanging in the background. As the track progresses, the brassy melody that rises eventually flourishes into a string led breakdown. Like a dolphin breaking the surface of the ocean, it arcs in the air before diving back down into the aqua with graceful ease.

Finally, ‘Ten O’Clock Dub’ marries half time elements over the steady footsteps of the house tempo. The uptempo heartbeat retains a vibrancy but the mood is most certainly more languid. The traditional organic dub backing sits perfectly with the modern electronic template set out by pioneering dub labels such as Basic Channel and Maurizio.

Up until now the local scene is still lacking resources, awareness and appreciation for experimental music in Vietnam. Our emergence is not only to claim our musical identities but also to open up new possibilities, exploration and potential future collaboration. For us, experimental music is a direct way to construct our sonic language; to freely express a complex range of personal experience, thoughts and emotions.