My Ambient friends over @ RM (Relaxed Machinery), under the guidance of Captain Northrup, have completed this awesome compilation of their collective aural sweat…(and it sounds terrific!)

Slow Music was formed in 2005 as a way to create live ambient/textural/environmental music in a live context.  Rieflin describes how, “openness and stillness become a part of the musical vocabulary, as well as density and activity.  It can be both beautiful and surprisingly intense.  And, being improvisational in nature, you never know what will happen next, which makes it all the more exciting.” Innovators to the core, Slow Music has no website, no band photos, nor commercially available music. The best way to listen is to show up.  It’ll be worth it.

“The climax of the final improvisation at Seattle’s Showbox is superb: a frenetic tangle of howling notes, ascending arco bass and shimmering cymbals provide a devastating conclusion.” Sid Smith, DGMLive

Peter Buck guitar and things (Peter’s guitaring in R.E.M. is singular; he’ll probably play some of these shows with a butter knife)

Matt Chamberlain drums and drum-like things (Matt has played with almost everyone in the world, such as Pearl Jam, Edie Brickell, Critters Buggin, SNL house band; look him up – it’s impressive)

The Humans making their first ever west coast performances!

Toyah – a hugely successful English pop singer, film & stage actress, and writer – formed The Humans in 2007 after being invited by the Estonian ambassador to tour Estonia and to perform for the president.  With both a strong pop sensibility and playful experimental streak, this creative formation marked a radical departure for Toyah.  Eschewing the conventional rock band line-up, the core of The Humans focuses on her voice flanked by two bass players. Although the records & live shows include a wider range of instrumentation, Humans music centers around singing and bass.  Their third CD, to be released later this year, is the most catchy and danceable record yet.

Purchase from your device!

Zeitgeber is a German word that, loosely translated, means “synchronizer.” It’s also the new project of Electric Deluxe head Speedy J and Stroboscopic Artefacts’ boss Lucy. Both artists make some of the most forward-thinking techno around, but Zeitgeber sees them pushing together even further into uncharted territories. Freed of dancefloorconsiderations, the duo have constructed an album that breathes with life and rewards close listening.

That’s no surprise when you consider the artists involved. Speedy J has been around from techno’s very beginnings. Based in Rotterdam, his Electric Deluxe label has consistently released techno that has gleefully tugged at the constraints of the genre. Lucy, on the other hand, is a newer name to most techno fans, but his Stroboscopic Artefacts label has quickly made a name for itself as one of the leading purveyors of the stuff.Unpredictable and exciting are two words for much of what you get on SA. And that most definitely applies to Zeitgeber the album as well. The album kicks into life slowly with “Closely Related,” a track that sounds like a motor unsuccessfully revving up, its attempts extinguished every so often by a plate of molten glass. “These Rhythms” lives up to its name – as long as the “these” of its title is pronounced in an incredulous way. “Skin” devolves into white noise by its fourth minute, pulls itself together (barely) and then slithers onward like a snake that’s stuck in a desert looking for someone to poison.

It should be mentioned (if you weren’t sure already) that none of these tracks sound like conventional techno. They’re typified by the careful and exacting sound design of much of Speedy J and Lucy’s work but it employed to almost completely abstract ends. It’s only on “None of Their Defects” that a beat proudly comes to the forefront. True to form, though, it’s heavily swung and eventually gives way to one of the most emotional melodies of the album. “From Here” follows a similar path, building from a few simple elements to a chittering and complex finale. “Now Imagine” shudders and quakes across its ten minute length, every single one of them completely necessary to make its point. “Before They Wake” is a gentle lullaby that hides multitudes under the calm surface. The album concludes with “Display 24” a track which seems to have taken a choir from Popul Vuh and stretched it out to epic lengths underneath a clanking, industrial-sized rhythm. It’s a terrifying ending to an album that doesn’t often let the light in.

That’s by design, however. Because when Zeitgeber do let the light in, it’s all the brighter. You’d expect nothing less from two of the most talented producers in the techno world. The culmination of 18 months of work, Zeitgeber is an album that is a collaboration in the best sense. Two artists urging other to new heights and new sounds.

Lucy (Artist) | Format: Audio CD | This title will be released on February 18, 2014.
Churches Schools and Guns. A provocative name for a provocative album of techno from one of the genre’s most consistently intriguing producers, Lucy. This, his second solo album, pushes forward from his debut full-length, 2011’s Wordplay for Working Bees, and firmly establishes him in a league of his own. Over the past few years Lucy’s label, Stroboscopic Artefacts, has became a watchword for techno’s vanguard – providing a platform for new artists pushing at the genre’s boundaries and a harbor for some of the most experimental work from names you already recognize. Lucy’s progress as a producer has followed that same trajectory, moving from relatively straightforward dancefloor-driven material to deeper, murkier places. Churches Schools and Guns continues on, a collection of 12 tracks that sound – more than anything else – like the act of searching. 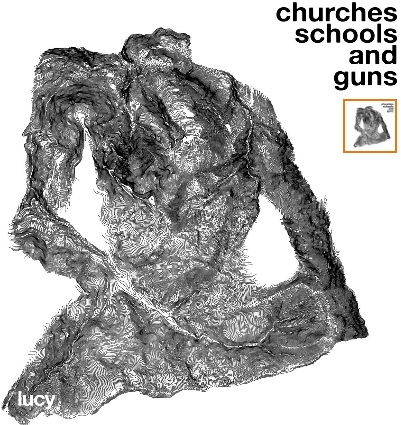 Though a bit late to the party, I grabbed parts 5, 7 & 8 from EnoShop & then turned then into something…better!

A private entrance into a personal fortress of mental solitude amidst a topsy-turvy world doing its best to destroy meaning, morality, truth & that which is sacred. Attain a moments respite then…before you unlock the gun cabinet & make those postmodern bastards pay!

Dennis Huddleston’s ‘Lithea’ revved up for the new year.

Update [1.2.14] Added in Brian Eno’s Compact Forest Proposal (Condition 8) as track 18, bumping ‘The Last Secret’ to track 19. Contact me via the comments section for any wishing an upload of this version.