Hungarian guitarist Ferenc Snétberger made a lot of new friends with his ECM solo debut In Concert (“a beautiful, assured performance” – All About Jazz) and will make many more with Titok, which features his trio with Swedish bassist Anders Jormin and US drummer Joey Baron.  Recorded at Oslo’s Rainbow Studio in May 2015 and produced by Manfred Eicher, it’s a warm and involving album, with an emphasis on intensely melodic improvisation and interaction which draws the listener gently into its sound-world.

The rapport between Snétberger and Jormin is evident from the outset, as both guitar and bass explore the contours of Ference’s compositions. Throughout, Joey Baron’s drums and cymbals provide shading and texture with restraint and subtlety.

Hungarian guitarist Ferenc Snétberger leads a trio with Swedish bassist Anders Jormin and US drummer Joey Baron in this warm and involving recording, produced by Manfred Eicher in Oslo, and intensely melodic improvisation draws the listener gently into its sound-world. The gracefully flowing guitar (Snétberger has a way of making even complex phrases seem effortless), the enveloping rhythmic undertow, and the highly creative playing from all participants captivate throughout Titok. There is soloistic brilliance here and high-level interplay, and the music takes the time it needs to unfold, breathing very naturally. The compound sound of the trio, with Ferenc’s acoustic nylon-string guitar partnered by bass and drums, is special. Joey Baron shades and colours the music with great subtlety using brushes, stick and hands, and the rapport between Snétberger and Jormin is evident from the outset, as both guitar and bass explore the contours of Ferenc’s compositions. “The dialogue here between classical guitar and Anders’s way of playing the bass seems to me unique,” observes Ferenc Snétberger. “Anders has a special ‘voicing’, a special way of entering into my music. And, together, he and Joey offer inspirations which are mirrored in my playing. Manfred’s participation was also inspiring – without his ideas, and his choice of pieces and the sequencing of them, the album could not have existed in this form.”

The producer recommended Jormin and Baron for this project and the trio came together to play three concerts in Hungary before the session at Rainbow Studios, where spontaneity was the watchword. The album is framed by music freely created in the moment: the opening piece “Cou Cou”, the title track “Titok” and the three concluding pieces “Clown”, “Rush” and “Inference” are all improvised discoveries. The sense of searching and finding in the opening moments gives way to the clearly etched melody of “Kék Kerék”, a rather beautiful older melody of Ferenc’s. “Rambling” is the first of several pieces written for this trio, the writing leaving space for bass and drums to add their statements. The tenderly phrased “Fairytale” likewise invites Jormin to add countermelodies in the deep end. “Leolo”, dedicated to Ferenc and Angela Snétberger’s grandson Leo, begins with nursery rhyme melodic simplicity and develops into elegant chamber music, including a fine section with Jormin’s arco bass…Ferenc Snétberger’s thoroughly distinctive guitar style has been gradually shaped through the absorption and transformation of many influences. Born in 1957 into a very musical family, Ferenc had classical guitar lessons from age 13, and studied jazz guitar in Budapest. Based in Berlin from 1988, he began to harmonize the full range of his guitaristic interests, from Django Reinhardt and Roma music to Brazilian and other Latin American musics via US jazz and European classical tradition – from the baroque to contemporary composition. “Alom” on the present disc is an adaptation of an old theme referencing Roma music, while “Orange Tango” and “Renaissance” acknowledge their inspirational sources in their titles. Yet none of these pieces sounds “eclectic”, the diverse sources are integrated organically inside Snétberger’s music, and accessed readily through the guitar. (Throughout Titok, Ferenc plays a guitar hand-built to his specifications by the late German luthier Tom Launhardt.)

Titok is the second ECM album by Ferenc Snétberger. It follows the critically-acclaimed In Concert, recorded at Budapest’s Franz List Academy of Music (“A beautiful, assured performance” – All About Jazz).

Anders Jormin and Joey Baron have appeared on many ECM records, but Titok marks the first time they have played together on a session for the label (they have periodically crossed paths in live contexts – playing for instance in trio with the late John Taylor). Jormin has made several albums as a leader for ECM, most recently Trees of Light, with singer and fiddler Lena Willemark and koto player Karin Nakagawa. His other discs include Xieyi, In winds, in light, and Ad Lucem. A long-time member of the Bobo Stenson Trio, he also appears on albums with Don Cherry, Charles Lloyd, Tomasz Stanko, Sinikka Langeland and others.

Joey Baron has been John Abercrombie’s drummer of choice for two decades and appears on the Abercrombie Quartet’s newest release Up and Coming. Baron is also currently a member of the trios of Jakob Bro (album: Streams) and Gary Peacock (albums: Now This and the forthcoming Tangents, due this autumn).

Plans for further Snétberger concerts with Jormin and Baron are currently being worked on. Meanwhile, Ferenc also fronts an admirable trio with British bassist Phil Donkin and New York-based Hungarian drummer Ferenc Németh, which recently brought some of the Titok repertoire to Europe’s clubs and concert halls. In October 2017 Ferenc Snétberger will tour in trio with Anders Jormin and Ferenc Németh. 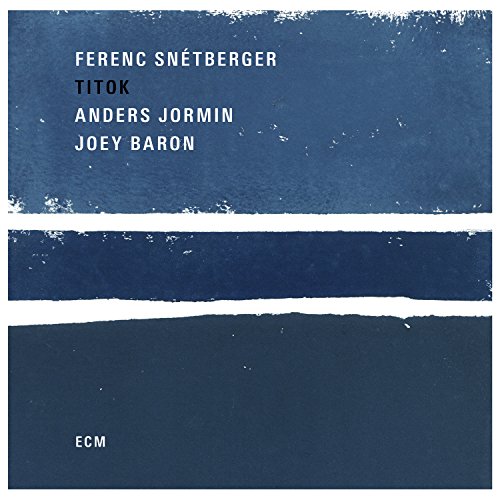